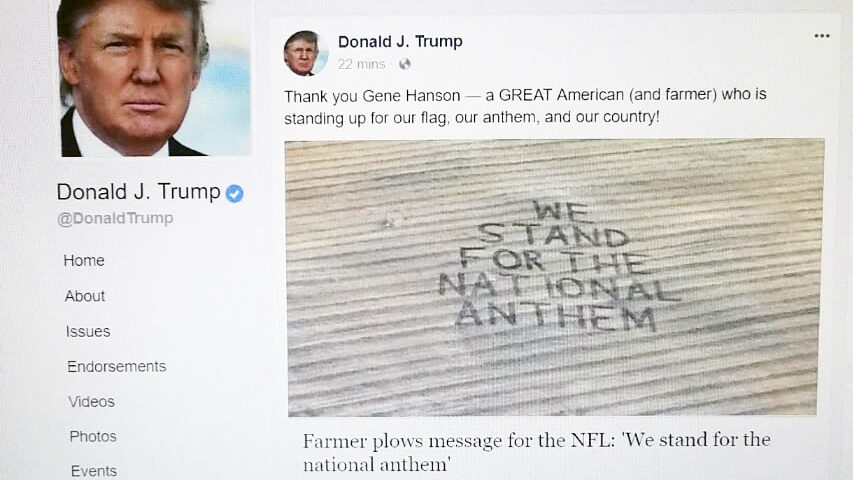 As a Fox News reporter, it was an honor to cover news during your four years in office.

From highlighting religious freedom around the world to achieving peace in the Middle East and prioritizing the right to life for the most vulnerable, there have been countless highlights often ignored or downplayed by the mainstream media.

But for me, I’ll never forget a simple message you had for a God-fearing farmer from Edgeley, North Dakota.

I interviewed farmer Gene Hanson who had a message for the NFL plowed in his field: “We stand for the National Anthem.”

He wanted to add, “We kneel at the cross,” but said the first frost of the season, around October 2017, prevented that.

You shared the story on Facebook and wrote this: “Thank you Gene Hanson — a GREAT American (and farmer) who is standing up for our flag, our anthem, and our country!”

It was a great honor I shared with family and friends, especially coming from a president very active on social media.

Unfortunately, it’s blocked on Facebook today due to Big Tech censorship, which I hope never happens to anyone because of their political beliefs.

Farmer Gene and I stayed in touch over the years and he sent me quite a few mega-messages he plowed, including “Merry Christmas,” spanning a football field.

Gene has quite the track record of designing and digging massive messages – many political – using his old Massey tractor on his 850-acre farm.

And he doesn’t use GPS or any technology for the work, which he says “works out pretty good in a harvested bean field.”

I’d have to agree.

He even got creative, using approximately 150 of his neighbor’s young black Angus cattle, to represent a hopeful symbol — the cross.

“Holy Cow!” I wrote in a fun article about the sacred scene.

And today I’m reminded of the cross. The simple fact that no matter who is president, Jesus is King.

President Trump, you honored the everyday American, from the farmer in North Dakota to the North Korean defector.

I wish you and First Lady Melania Trump all the best.

And I hope for continued healing in this nation, and reiterate something you reminded us in your farewell address from the White House: “for our country and for our children, the best is yet to come.”